This POTW was originally drafted for Monday the 8th April, but due to technical difficulties it was delayed.

It’s that time of year when the cherry blossoms (sakura) are… were out. They cherry blossoms are usually out in my area now, and would be for the next week or so, at least until the spring breeze blows their fragile petals from their stems. However, due to unseasonally warm weather in the last month, the cherry blossoms bloomed quite early. Also, due to unseasonal weather, most of Japan suffered from high winds, in some areas, classed as strong as typhoon winds, and perhaps more dangerous due to their sustained force. Usually, company groups, community groups, and families go and enjoy picnicing and partying under the gentle pink blossoms in the day or when lit up at night in what’s called ‘hanami’ (cherry blossom viewing) parties. This is also a feature for new recruits to companies who traditionally start in April, as a way of welcoming in the new department employees. This year, I doubt it was much of an event because it was so early, and because of the typhoon like winds on the weekend, which should have been prime cherry blossom viewing party time. Consequently, the best I could do this year is to post a file photo, from 2006 below, and see the gallery for more cherry blossom photos. 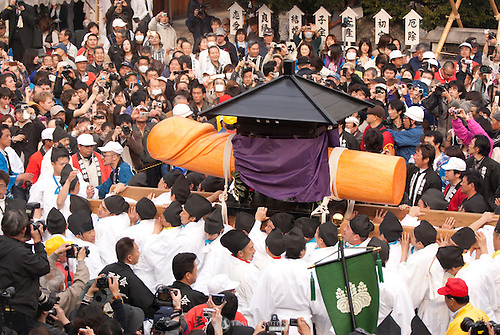 It was announced on the NHK TV news this evening that the Japanese Ministry of Culture and Trade plans to organise the first international “export” of the Tagata Fertility Festival to San Francisco, and then to Dallas later in the same summer. Depending on the success of the event, it may also be exported to other cities around the world in 2014, including Salt Lake City, Rome, and possibly Beijing and Pyongyang.

The Ministry of Culture and Trade spokesman, Yuki Wakabashi, hopes the festival can include local men from Tagata, a town near Nagoya city, as well as local men in San Francisco, Dallas, Salt Lake City, the Vatican, and other cities to assist in lifting the one tonne phallus.

This photo, and others like it, are available on the PhotoShelter portfolio. Don’t forget the 10% discount currently available.