Twenty-eight year old Mongolian Kakuryu (born Mangaljalav Anand; Wikipedia) becomes the fourth Mongolian to win the Emperor’s Cup, after Asashoryu, Hakuho, and Harumafuji. It was also announced that he is to be promoted to be one of three top-ranked wrestlers called “Yokuzuna”. This photo is currently available for immediate purchase or licensing from my Sumo Gallery. It has been an exciting tournament, the two current top-ranked wrestlers, Hakuho and Harumafuji have struggled a little of late, Kotooshu crashed out and retired, and then this upset. It’s been great.

First tweets from a Japanese sports journalist, @kaznagatsuka, says Kotooshu may be quiting this tournament.

Below, Kotooshu ahead of his bout where he was defeated by Harumafuji just this Monday.

Bulgarian Kotooshu in his final tournament in the Osaka Spring Tournament.

Out of form Kotooshu in his last tournament?

I don’t like to focus on the negative. I usually post stuff on the sumo because it’s just so fascinating. The Bulgarian Kotooshu (born Kaloyan Stefanov Mahlyanov, Wikipedia) was still the new kid on the block and a rising star when I first arrived in Japan. He was great to watch, though he made mistakes, he still had energy and enthusiasm so that he could win, and it seemed he was growing into the role of the top ranked wrestler, a yokozuna. However, he never got past Ozeki, the second highest rank and was demoted to Sekiwaki at the end of 2013. He won one tournament and the Emperor’s Cup in 2008 (Wikipedia), and he was the darling of the media, and was on all the Bulgarian Yoghurt advertisements. Throughout his sumo career he’s been plagued by various injuries to his knees and arms. This tournament is the worst I’ve seen of him perform. In fact, every time I’ve seen him live, he’s lost, and Monday was no different. However, one win for nine losses is a record that would mean he’d have to be further demoted or retire.

Below, is an in-form and on-fire Harumafuji (right) displaying his strength, whilst a very out-of-form (and possibly very deflated and demotivated) Kotooshu watches on.

In form Mongolian Harumafuji wins easily against a struggling Bulgarian Kotooshu in the Osaka Spring Tournament.

A little inspiration for the photographers who keep up with this blog. I’ve decided to do the Photo of the Week once a month… err… at least for a while, but I might release these photography quotes on Sundays perhaps fortnightly. In other words, I’m still experimenting and having fun blogging. In any case, there’ll be more to come in the coming months.

I don’t normally blow my own trumpet or show off, but sometimes you have to sing your own praises. However, how else can credit go where credit is due in this dynamic, short-term memory age of the internet. JPA has done some things that were not previously seen on the internet before. However, I’m not claiming to be the first, but these ideas were independently thought of by me (without having seen others do it first), or revived by me. So, what is there to be so proud about?

As at time of writing (mid-January, 2014), this photo of the Tado Horse festival is 624 days old. I think it is probably also the first time anyone has photographed the back of their camera and posted an update to a social network. This was posted via iPhone to Twitpic, to Twitter. Luckily, I’ve worked out how to make these camera-back photos look more interesting (recent example). Here’s the rest of my Twitpic portfolio for social networking.

I didn’t invent referencing. The Harvard, Oxford, and APA referencing styles for academic writing has been around for much longer than I’ve been alive. However, I am one of the very few bloggers who provide links to my information sources. So if I write about the Naked Man Festival, News events, the Tado Horse Festival, the Tenjin Festival, whatever, I provide a little bit of starting information to help put my photos in context for journalists and sources to get them going.

The start of the Tenjin Festival (Tenjin Matsuri) at Tenjin Shrine, Osaka. Photo available via my agent’s website.

Surprisingly, I haven’t seen this catching on, yet. What better way to self-promote, and show how your own photos can be used? For these photos, and others like them, see my PhotoShelter Models gallery.

A young lady appearing as though she’s holding a promo card.

This is my favourite kind of photography, using good old fashioned film, with all it’s charisma, and lots of experimentation. Before publishing Poem of a Cacophonous City, I’ve not seen any double exposure photography on social networking sites nor photographer websites (I was never really a Flickr user at that time), except when you look up Pablo Picasso’s own work from decades before. It would seem that since publishing this set of photos, people have also rediscovered it, or are now sharing it beyond Flickr. For this photo, and others like it, see my PhotoShelter Art gallery.

I don’t think I’ve the first to do this, but I’ve not seen anyone else do this one, yet. It’s simple, and I think it’s a great way to show case my work. It’s simple, choose a theme and a set of photos, or just lump all your favourite photos together, add cool music or recorded sound, and press ‘Export’, and it’s done. Here’s my YouTube Channel, and an Intro photo-video:

And the Camera Pixo Editor’s Choice Award goes to…

Wow! It’s me! And what makes it even more sweet is that it is for one of my favourite photos, Poem of a Cacophonous City: Go City, Go. This series of photos was taken on black and white film with an old style magical camera trick, invented long before the word “computer” was a thing. CameraPixo has just published their latest issue (No2), this time dedicated to my favourite kind of photography, black and white, titled The Moment. You’ll find this issue’s illustrious Five-Star Editor’s Choice award winner very humbly on page 54. On the way there (page 54) and past it, be sure to enjoy all the other great and wonderful images from around the world. It’s truly a great issue, and I’m so pleased to have one of my photos counted among a great set of photos from great international photographers. Finally, thanks to my Flattr microsponsors for your support, this is what it’s about.

ScreenShot of Andrew’s photo published in CameraPixo’s The Moment issue No.2. http://issuu.com/camerapixo/docs/bw-camerapixo-02-online

The Nagoya Women’s Marathon will be on this Sunday, 9th March. At time of writing I don’t have any specific news about it, but I suspect that it will have all of Japan’s top women competing, and tens of thousands of women, and hundreds (or thousands) of men, too. In previous years it has been an Olympic qualifying event attracting various internarion runners (previous blog posts, 2012 and 2013, blog tag ‘marathon‘). For these photos see my PhotoShelter portfolio and my agent’s website. I will probably attend the event, so new photos may be added.

Good luck to the competitors, and best wishes to all the runners entering. For everyone else, on Sunday I’ll be on Twitter/JapanesePhotos.

Each year on the 3rd March is Girls Day in Japan. In Japanese it’s called Hina Matsuri, which means Dolls Festival. Usually, families set up a large display in late February, like the one below, and have their daughters pose next to it for photos. The dolls are based on the Heian court, and are arranged in descending order of rank across either a five or seven tiers. Each tier and doll has a specific meaning, but generally it was or is believed that the dolls take away evil spirits. The display is usually set up in the tatami room or guest room of the house. There are special foods and drinks that girls have on the day. Some communities might host some events just for girls, but other than that, not much else happens, however, the Nagoya Womens’ Marathon is next weekend. Also see the Japan Today Girls Day story, and Wikipedia/hinamatsuri.

For this photo, and others like it, see the Girls Day gallery. 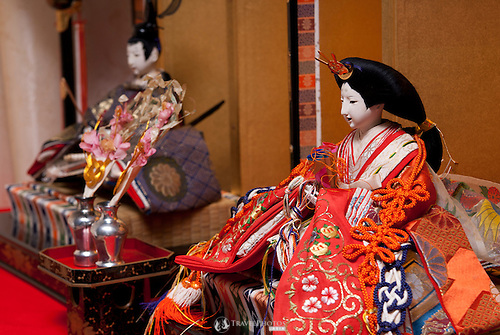