Firstly, I have to give this background. I still use an old version of Adobe PhotoShop LightRoom (Lr3), because it’s just too hard to get an upgrade to Lr5. I’ve since bought a new camera, which my old version of Lr does not support, so I now need to upgrade my Lr. It’s kind of an urgent issue. I’ve just come back from Vietnam after using this new camera, and I cannot process any of the photos at a professional level until I upgrade.

Adobe PhotoShop LightRoom 3 does not support my new camera.

I am absolutely, and utterly frustrated with Adobe. I don’t like to do rant posts, because they only ratchet myself up more… unnecessarily. I’m almost giving up on Adobe and perhaps days away from abandoning them and going to Corel. I have been an Adobe customer for many years using both PhotoShop and LightRoom. Though my first art software was probably Corel PaintShop (I think I remember that right). I have money, and I’m willing to spend, but I keep getting blocked by Adobe’s bad website design.

The problem is this: I live in Japan, but I’m not Japanese. My Japanese reading ability isn’t good enough for me to confidently navigate the Adobe-Japan checkout. I’ve contacted Adobe a few times before, and even spent an hour on the phone with one of their English speaking customer support staff, but to no avail. So, why not purchase from the English version of Adobe? Well, the Japanese version of the website is available in Japanese only. The English versions of the website are only available for English speaking countries only:

Adobe blocking me from making a legal purchase.

To add insult to injury, Adobe sends me emails in Japanese.

Adobe emails me in Japanese, despite my account being set to English.

I think this email is from Adobe Customer Support, perhaps asking for feedback on how well they did in the provision of limited support they gave. If it’s of highest priority, as the email is set to, then why didn’t they make it readable for me. Despite that, my account has always been set to English:

In the Adobe menu the language for communication is set to English.

So, after multiple contacts with customer service (phone calls, online chats, and community forums now) and getting nowhere, out of utter frustration I decided to check out Bibble5, some software I was considering a few years ago for my Linux powered travel laptop. I’ve since learnt that Corel bought out Bibble, and have released AfterShot Pro, and now Corel AfterShot Pro 2, which are of Bibble heritage. Here’s the important point, it supports my new camera, so I can process my hundreds of Vietnam photos. Additionally, it has versions for Windows, Mac, and Linux. How cool is that. Also, it’s cheaper, faster, and includes HDR processing. The only sticking point is that the order of the menu items do not reflect a natural order in which you should process your image. As in, Exposure first, then colour temp, fill light, blacks, contrast, highlights, etc. It seems like it’s in a different order for a reason I don’t yet know. But that’s no big deal. I remember as a teenager in the 1990’s Corel PaintShop was the popular art software, and it is still alive and kicking, and promoted as a companion to Aftershot, much like PhotoShop and Lr are meant to be peas in a pod.

Corel AfterShot Pro 2 is much cheaper and does the same job, but faster and may be better?

Finally, he’s the important part. It looks like I can go through the entire checkout procedure in English unhindered, but yet to be confirmed. I have money, and I’m ready to spend. What say you, Adobe?

It looks like it will be possible for expats and travellers to purchase Corel AfterShot Pro 2 in their preferred language, regardless of their current location.

JapanesePhotos.Asia has photos from other countries, and Vietnam is the latest on the list… or rather, the new gallery in the portfolio. Many photos of Vietnam are already available for immediate purchase, and more are still being processed as you read this. Other galleries in the portfolio include Australia, Cambodia, Hong Kong, South Korea, Taiwan, Vietnam (Bella Vu & Hieu), and even England and some European countries are in the archives. Genres include art, cityscapes, landscapes, model release photos, portraits, rights managed photos, seasons, transport, and more.  In all honesty, I just realised that I have a load of Taiwanese film-based photos that I haven’t migrated to this decade. Hmm… I’ll have to get the scanner out and get to work in this winter’s rainy days. In any case, my photos are available at my agent’s website, and my PhotoShelter portfolio.

A young lady in a cafe in Saigon, Vietnam.

This Photo of the Week comes from a shoot I did few weeks ago with a great Vietnamese model, Bella Vu. Here, she’s wearing a fashionable version of the áo dài (pron “ah-oh yai”). Áo dàis was probably invented in about 1744, but the first modern version appeared in a Paris fashion show in 1921 and became the canonical design we know now (Wikipedia). Today, the áo dài is only really worn for weddings, high school girl uniforms, and by receptionists. We were lucky enough to shoot in The Morning Café for a few hours, to which we are really, really grateful to TMC (TMC on FaceBook). It’s a great location in Saigon, District 1, about a 3-5min walk from the Ben Thanh Market on Le Loi Street, heading towards the Opera House. It’s a quiet place to relax in the mornings, especially if you want a good cappuccino and time to bash away on your laptop keyboard.

This photo of Bella Vu is one of the first of thousands I’ve taken in Vietnam, and so this, and others like it, will come available in the coming weeks on by my Agent’s website, and in my Vietnam Gallery of my PhotoShelter portfolio.

A young lady in a cafe in Saigon, Vietnam.

This Photo of the Week (POTW) comes from the Ho Chi Minh City Museum. It seems most tourists either arrive in Hanoi or HCMC, and travel to the other city. Everyone I met was either going south to north, or north to south. There seems to be an itinerary that most people follow, almost religiously and it includes Da Lat, Ho An, Nha Trang, Ha Long Bay, etc, but mostly keeping out of HCMC. However, I hung out in HCMC and had my own fun. A lot of people I met on the tourist path said that they were so glad to get out of the hustle and bustle of HCMC, but I didn’t mind being there at all. There are plenty of things to see and experience.

One such place that is unhurried, relatively empty, a place out of the rain, really cheap (entry is about 75 US cents or 15,000VNM Dong) is the HCMC Museum. It is the former Vice President’s palace of South Vietnam. Construction completed in 1890 and originally known as Gia Long Palace, it became the residence of the Cochinchina Governor when under French rule (Wikipedia). During the South Vietnam era, it became the Vice President’s palace when the president built something even grander than this (now known as Independence Palace). Gia Long Palace is very grand, very elaborate, and it’s a proper mansion. Far more than what you’d expect the vice president of any country would get, let alone a newly independent former French colony. The entrance way is so grand, that today wedding photographers have a standardised course, images, and a routined array of angles for photographing newly weds. The rooms are so large that most are bigger than my entire apartment. And there’s even a bunker and escape route too connecting to the Independence Palace. Not that it helped in the end. What is really worth seeing, though, is history as told by the winners. It is their history, experienced, written and told by them. The perspective is really different. The building itself has not been well maintained, and so there are walls with paint flakes missing. The former South-Vietnamese Air Force jet fighters on display outside are in serious disrepair, even for display items. Cars out back need renovating, too. However, it is an escape from the city, and something worth experiencing.

This photo, and others like it will be available for licensing very soon at my agent’s portfolio (Asia Photo Connection), and my PhotoShelter portfolio at the Vietnam gallery, and Hieu’s gallery.

This Photo of the Week is of this lady with the most adorable personality. She is physically tiny, and as you can see, her ceramic wares stall is also really tiny. However, she is surrounded by a vast and wonderful collection of pots, cups, you name it. The styles and designs are beautiful. If you happen to find yourself in Vietnam, you can possibly find her in amongst the myriad of stalls at the Ben Thanh Market, Saigon, District 1, of Ho Chi Minh City. Of course, more photos of my Vietnam adventure will be posted in coming weeks to my PhotoShelter Vietnam gallery.

Oh, if you’re a little confused by the city names. The city is a new city, being established by the migrating Vietnamese, as they took over this part of old Cambodia. Then the Chinese came. Then the French merged the sprawling areas and called them Saigon-Cholon. Then the Cholon part of the name was dropped, and Saigon was used to refer to the smaller area and the wider city. Then the communists won the war which ended in 1975, and they renamed the whole city HCMC, but ‘Saigon’ still refers to the central part of HCMC. I think I’ve got that right.

Posted in On the road, Photo of the Week, PhotoShelter tagged with Ben Thanh Market, potw, Saigon, vietnam, Vietnamese

Here’s a sneak peak preview of what’s to come. This photo shoot was with the great Vietnamese model Bella Vu in The Morning Cafe. A special thanks to TMC for allowing us to shoot there. It was a quiet escape from the bustle of HCMC, where you can enjoy a great cappuccino. If you’re ever in town, you can find The Morning Cafe on Trip Advisor; 2nd Floor, 36 Le Loi Street, Ben Nghe Ward, District 1, Ho Chi Minh City (TMC on Google Maps). The photos will be prepared and uploaded in the coming weeks.

A young lady in The Morning Cafe in Saigon, Vietnam.

It was on this weekend, but I didn’t go (I was preparing for the Vietnam trip I’m currently on). The Domatsuri (dance festival) is a great spectacular to watch, where typically 200 teams of between 30 to 50 members (it’s a big event) do a highly synchronised dance. The dance is performed on a stage, and a second routine is performed progressing along part of a road in the trendy Sakae shopping district. Many of the dance teams are community groups who enter every year, and typically these teams don’t vary their routines or costumes, which is why I’m a bit lukewarm about the event this year. But there are some teams that are in it to win, and they are truly worth watching. The link to this Domatsuri photo: 20110828_DSC5362.jpg. Past Domatsuri posts, and videos on the YouTube page. 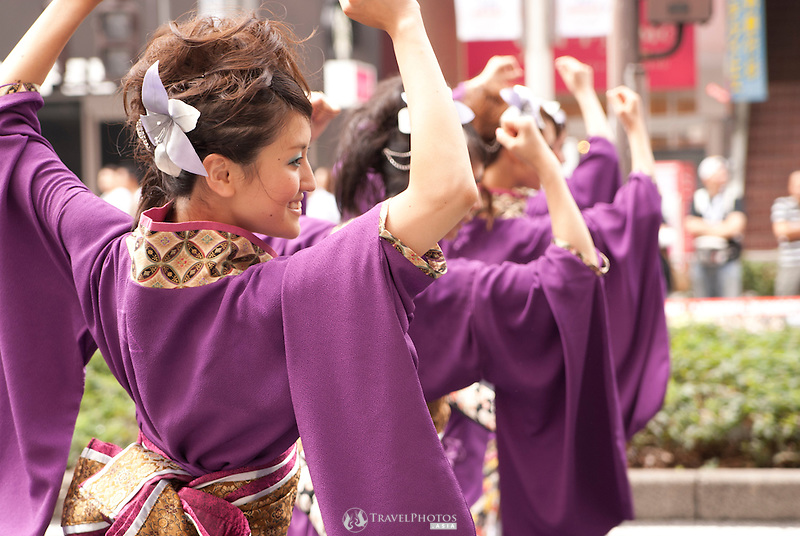