Plum flowers in Spring at Higashiyama Botanic Gardens on the first nicely warm weekend of the year. Just a few more weeks until the cherry blossoms (sakura) start. Update to the JapanesePhotos Instagram at: http://bit.ly/2n9Xjzi.
Posted in On the road, Photo of the Week tagged with Higashiyama Koen, nature, plum blossoms, spring

This article follows on from the previous article about my experience with Gnarbox, which so far has been terrible and dismal. However, this is the first proper glimmer of hope. The Gnarbox Kickstarter project started in July 2015, and was due to be delivered in March 2016 (twelve months ago). They had made five promises of deliveries, and has failed to fulfill any. They have also blocked me on Instagram, their only channel of communication outside of Kickstarter. They blocked me because I was one of many who complained about the non-delivery in Instagram comments. It should be noted that the blocking occurred days before CES in January, and before Lok Cheung saw them. The community of Kickstarter backers have complained loudly at the consistent failure of Gnarbox to deliver. Then this morning, there was a break in the weather.

The Gnarbox page on Kickstarter.

I received an email marked 7.38am this morning (my time) with the first update, first of any kind of communication from Gnarbox that I’m aware of in four weeks. In fact, the last communication from them was on the 16th of February, when in the comments section on Kickstarter they confirmed someone’s address had been received. Otherwise they’ve been ghost, and completely ignoring their Kickstarter backers. It appeared really bad, and it truly seemed like anything could have happened and we were in the dark.

This update is significant. But first I have to remind of you of their previous update on the 6th of Feb. They said that they had started production and quality control testing, and were aiming to get failure rate down, then the next week they’d go into full production and shipping, so we should expect our Gnarboxes by the end of February. Today’s update (16th March) said that they’d completed production, quality control testing, boxing, and shipping of the first 150 units. That is, it has taken them six weeks to achieve this with just the first 150 units, and that they had not completed the remaining 2000 or so units. These first 150 were sent to their friends, family, and “investors”. They didn’t define what an investor is, but backers are investors in Kickstarter language. They also said that assembly of the next 820 units has started and deliveries will begin from the 20th March. Following that, the rest are due to ship on the 3rd of April, which mine will probably be included in that last batch.

Again, what is interesting is what they did not say. They have not explained the four weeks of complete radio silence, they did not explain why they failed to do their production in that time, but could only achieve 150. However, these issues are small and insignificant to the fact that they are still committed to ensuring that from end-to-end they are still rigorously testing all aspects of what they are doing. That is to say, they are still testing their boxing, shipping, and tracking procedures on friends and family, and so this process should happen smoothly for the rest of us. I think it would have been easy for a very demoralised group that has failed multiple times to deliver on their promise just to give up and get it out without much more effort. In contrast, they are still committed to the learning experience and getting the production flow right. This point has to be acknowledged and respected.

Three things cannot be overlooked. Firstly, this is the sixth delivery promise they’ve made. The first being March 2016, 19th September, November, January 2017, February, and 20th March & 3rd April. Secondly, their planning needs improvement, but they certainly should have learnt a lot about this from this experience. Finally, communication, and therefore respect for their backers is in desperate need of improvement. A lot of excitement, enthusiasm, and publicity they garnered in July and August 2015 has been more than spent. Their product is already partially obsolete, especially as the built in wifi in new cameras means the Gnarbox no longer fills a gap in the market (Dan Cook on PetaPixel). Will I use mine? I don’t have a wifi enabled camera yet, but it could happen this year, and my new iPhone does a pretty damn good job for social media use.

We get you. Update to the JapanesePhotos Instagram at: http://bit.ly/2mboCVC.
Posted in On the road, TGIF tagged with tgif, weekend, woman

Tokyo is made of stairs

There are some things that travellers think they are prepared for, only to find that the guidebook said nothing about it. In this case, it’s that Tokyo is made of stairs. Well, mainly the subway public transport system; and not just Tokyo, but also Nagoya and Osaka too. As you will quickly realise on your first day here, it is tiring. Your feet may be sore, and your leg muscles worn, and you have quickly faded at the end of the day.

Before you come to Japan, I strongly, strongly urge you to do a lot more walking as a part of your preparation. If you can use a stair machine, do. Sure, there are escalators and elevators, but stairs are the mainstay. Elevators are few and far between. Even though there is at least one elevator per station, these are impossible to find, or are very inconveniently located. So, if you’re carrying heavy suitcases, have a pram, or in a wheelchair, you will have troubles; so leave earlier than most people would. However, you will have a great time here. Bring high energy snacks to help you get about the place, but you will be a lot fitter for having lived or been here. 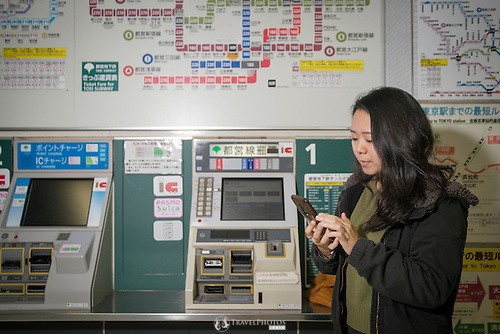