The Irish Music Night at The Cooper’s Irish Pub, in Nagoya.

I did a pub shoot last night. It was a fun challenge. It was an Irish music night, and it was fantastic, and we were lucky to have a great Irish dancer do a great performance too. I had to work in very low light and in a small tight space. I did my best to get the standard-clean shot, and some interesting creative photos too. I’m also really lucky to be able to go in and do a shoot with my studio lights.

Also, this weekend Super Typhoon Trami is arriving. It’s a seriously strong and therefore very dangerous typhoon. Please do not, do not, go out. Stockup on supplies today (Saturday), and then Netflix and chill the typhoon. For more information about the typhoon, please follow the Twitter hashtag #typhoon or #typhoontrami

During the typhoon, I’ll be working on photos from today’s pub shoot. Any work/background music recommendations?

We have published a lot of great travel articles, travel guides, and more here on our blog. However, we don’t get paid for it. A lot of people are able to benefit for free, but we struggle to afford the trips and the models we need. Consequently, we will be doing two new projects on Patreon.Com/ablyth.

I’ve covered the Kounomiya Naked Man Festival in the past; Kounomiya is the place and shrine near Nagoya, which is known in Japanese as Hadaka Matsuri, Hadaka means naked, and matsuri means festival. Below is the bigger spectacle in Okayama covered by the BBC just yesterday. Ceremonies for the Nagoya Kounomiya festival starts from this week, but the main event is on the 28th Feb 2018 (Kikuko Nagoya). If you want to participate in the this festival, you can email Kikuko. Enjoy.

Correction: I just received an email alerting me to an error on a source website. The event is not 28th Feb 2017, but in 2018 (which is 13th January of the lunar year).

Coming of Age Day in Japan 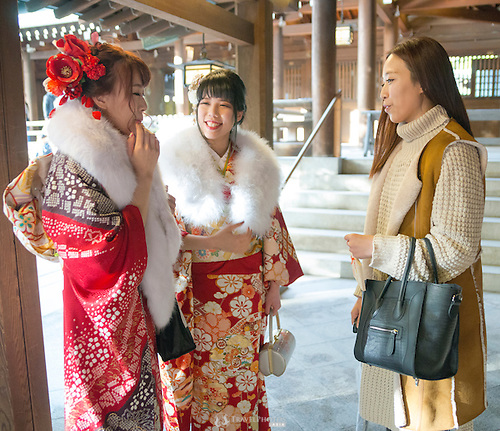 Hong Kong model Sabrina visiting Meiji Shrine in Tokyo during the Coming of Age Day in Japan. The Coming of Age Day (成人の日 Seijin no Hi) is celebrated annually on the second Monday in January by only young adults who have recently turned twenty years of age. They return to their high school to attend ceremonies, and then go to shrines and temples to pray for their futures. Typically the guys wear a nice suit; the same one they would wear for job interviews, but the ladies dress up in kimonos.

Unfortunate for the young ladies who chose too come to Meiji Shrine, there were hordes of tourists, photographers, and Sabrina and I waiting to harangue them into photos and selfies. It was almost masochistic the attention these ladies received from almost everyone there. Anyway, with the ladies pictured above we were nice and respectful. In fact, they were happy to talk to a Hong Kong model, were pleased with the photos I took, and then asked me to take exactly the same ones with their own camera. Because they did us a favour, I was happy to oblige.

It was great working with Sabrina, I hope she had a great time in Tokyo. Update to the JapanesePhotos Instagram at: http://bit.ly/2kpZFbj. Also see other photos from this collection at the Sabrina gallery on my PhotoShelter portfolio.

I only heard about the Tejikara Fire Festival just a few days before it was held. I couldn’t find much information on it, and didn’t really know what to expect. It seemed to be one of those small local festivals that get passed over by the big inner city events. The mystery and the festival had to be explored. In short, I had minimal directions, and minimal info, and a camera. Here is my experience.

When: Annually, on the second Saturday of April.

Time: Officially: 6.30pm to 9.10pm. Actually: Get there a lot earlier to enjoy the festival foods and atmosphere, and to find a good viewing point in the shrine. When I got there just after 6pm, things seemed to already be in full swing.

Transport: Take the Meitetsu train from Gifu (city) station bound for Inuyama, for about 8mins, ¥230 (Hypedia.com, 2016), then follow the crowd. Be sure to get two tickets, as there is only one ticket machine at Tejikara station, and the line up for it at 9pm will be crazy. Also, for your return be sure to get on the platform closest to the shrine for your return to Gifu city.

History: Apparently, it’s been a small local festival running for about 300 years, and seems to have a little or unknown origin.

What: I’m still unclear as to what goes on. There are lots of fire fighters, and some fire trucks around the shrine. There’s lots of guys dressed in regular shinto festival outfits, sometimes topless. There are small shrines carried on the shoulders of groups of men from particular districts around the shrine. Each portable shrine has a different display. They stop at certain intervals in their approach to the shrine and set off firecrackers. I know from my Taiwan experiences that firecrackers supposedly scare off ghosts, so this might be related. There are loud bells being struck with hammers making a racket. The portable shrines are taken into the shrine for some sort of event, that I couldn’t see. You really need to get there early and stake out a spot.

Then when it’s dark large overhead lanterns are lit with fireworks running up guide ropes. Some of these fail, and it seems to be a challenge that the crowd cheer and applaud for. There are firework canons lit to create a vertical cascade of sparks, and some sort of story or performance of a traditional nature performed at the Shrine. I really need to go back, meet a local there and learn more. Usually, I’m on top of this sort of event, but I could not find a local to ask because I wasn’t in a position to this time. I’ll probably go back next year.

Photos & licensing: These photos will be available at my agent Henry Westheim, and at my PhotoShelter portfolio.

Advice: Festival food is a little expensive, but the whole point is for it to be a social event, and have food that you normally can’t have. Take a fist full of change, and enjoy a range of snacks like curried french fries, fairy floss, toffee apples, deep fried chicken, mixed fruit drinks, and more. 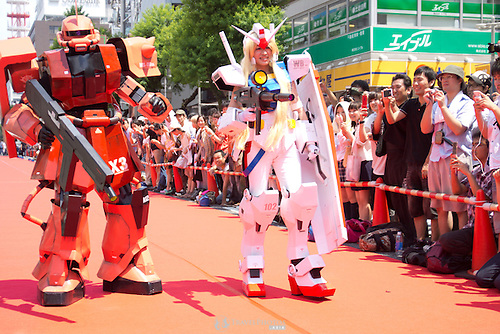 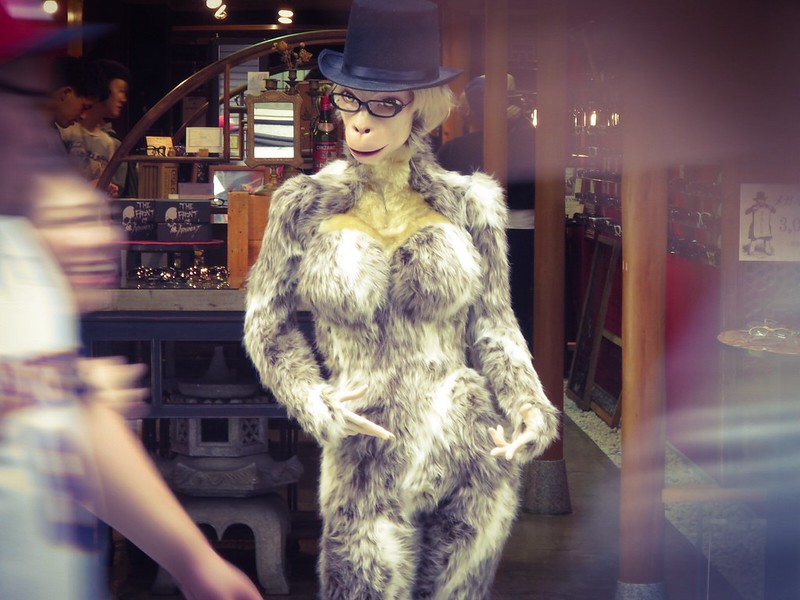 It’s that time of year when many towns are starting to have their festivals. It’s a time when the heat forces people to become nocturnal, don their light weight happi or yukata, and relax and enjoy life in their communities. See here for summer festival photos like this one below. Japanese festivals often involve a parade of portable shrines, food stalls, cold drinks, and hanging out with family, friends, and neighbours. Learn more about festivals like the Kuwana Ishidori, Nagoya Dance Festival, Nara Lantern festival, the Osaka Tenjin Festival. It’s moving season in Japan. Especially for company employees and their families, and some university students, it’s that time of year when a portion of the nation packs up and relocates. Moving companies and furniture store companies are booked out from about mid March until mid to late May, and I guess car rental agencies get busy too. Moving companies are very organised. You don’t have to pack a thing. For a one-person studio apartment (aka “1DK apartment”) they can just turn up, pack things in specialist boxes, and have your place empty within a couple of hours. You jump on the train, and meet your stuff at your new apartment. See the video below for more on this.

Removalists working in front of a condominium in moving season in Japan.

Japanese real estate agents have a code system for describing apartments and condominiums. The number means the places to sleep; D is Dining; K is kitchen; L is Living room. So you could get a 3LDK place, which is a large, three bedroom place with a living area, dining area, and kitchen. These are typically the open plan style. Most single people live in a 1 DK, which can be likened to a shoe box with a bathroom. These are kind of cheap, but ok.

It’s International Women’s Day (Wikipedia). Japan isn’t exactly the symbol or beacon of gender equality, but there are some highlights. Over fifty years ago, women in Japanese universities were extremely rare or not even allowed in, however, they are now making up over 50% of university entrants. I have read somewhere that Japan probably has the world’s best educated housewives. Women are taking up an increasing number of office jobs, though some struggles remain. Sayaka Osakabe recently won an American award for promoting women’s rights in the workplace (on 7th March 2015, Japan Today). The number of women in Japan’s parliament has doubled in the last twenty years, and Japan has moved up 14 places in world rankings; albeit from 127th to 113th (6th March, 2015 Japan Times). There will surely be more achievements in the future, however, what is needed? What is the highest priority now?

JapanesePhotos.Asia wishes for a great day to all women everywhere, and a hope for fortune and happiness to all people.