Twenty-eight year old Mongolian Kakuryu (born Mangaljalav Anand; Wikipedia) becomes the fourth Mongolian to win the Emperor’s Cup, after Asashoryu, Hakuho, and Harumafuji. It was also announced that he is to be promoted to be one of three top-ranked wrestlers called “Yokuzuna”. This photo is currently available for immediate purchase or licensing from my Sumo Gallery. It has been an exciting tournament, the two current top-ranked wrestlers, Hakuho and Harumafuji have struggled a little of late, Kotooshu crashed out and retired, and then this upset. It’s been great.

First tweets from a Japanese sports journalist, @kaznagatsuka, says Kotooshu may be quiting this tournament.

Below, Kotooshu ahead of his bout where he was defeated by Harumafuji just this Monday.

Bulgarian Kotooshu in his final tournament in the Osaka Spring Tournament.

Out of form Kotooshu in his last tournament?

I don’t like to focus on the negative. I usually post stuff on the sumo because it’s just so fascinating. The Bulgarian Kotooshu (born Kaloyan Stefanov Mahlyanov, Wikipedia) was still the new kid on the block and a rising star when I first arrived in Japan. He was great to watch, though he made mistakes, he still had energy and enthusiasm so that he could win, and it seemed he was growing into the role of the top ranked wrestler, a yokozuna. However, he never got past Ozeki, the second highest rank and was demoted to Sekiwaki at the end of 2013. He won one tournament and the Emperor’s Cup in 2008 (Wikipedia), and he was the darling of the media, and was on all the Bulgarian Yoghurt advertisements. Throughout his sumo career he’s been plagued by various injuries to his knees and arms. This tournament is the worst I’ve seen of him perform. In fact, every time I’ve seen him live, he’s lost, and Monday was no different. However, one win for nine losses is a record that would mean he’d have to be further demoted or retire.

Below, is an in-form and on-fire Harumafuji (right) displaying his strength, whilst a very out-of-form (and possibly very deflated and demotivated) Kotooshu watches on.

In form Mongolian Harumafuji wins easily against a struggling Bulgarian Kotooshu in the Osaka Spring Tournament.

And the Camera Pixo Editor’s Choice Award goes to…

Wow! It’s me! And what makes it even more sweet is that it is for one of my favourite photos, Poem of a Cacophonous City: Go City, Go. This series of photos was taken on black and white film with an old style magical camera trick, invented long before the word “computer” was a thing. CameraPixo has just published their latest issue (No2), this time dedicated to my favourite kind of photography, black and white, titled The Moment. You’ll find this issue’s illustrious Five-Star Editor’s Choice award winner very humbly on page 54. On the way there (page 54) and past it, be sure to enjoy all the other great and wonderful images from around the world. It’s truly a great issue, and I’m so pleased to have one of my photos counted among a great set of photos from great international photographers. Finally, thanks to my Flattr microsponsors for your support, this is what it’s about.

ScreenShot of Andrew’s photo published in CameraPixo’s The Moment issue No.2. http://issuu.com/camerapixo/docs/bw-camerapixo-02-online

The Nagoya Women’s Marathon will be on this Sunday, 9th March. At time of writing I don’t have any specific news about it, but I suspect that it will have all of Japan’s top women competing, and tens of thousands of women, and hundreds (or thousands) of men, too. In previous years it has been an Olympic qualifying event attracting various internarion runners (previous blog posts, 2012 and 2013, blog tag ‘marathon‘). For these photos see my PhotoShelter portfolio and my agent’s website. I will probably attend the event, so new photos may be added.

Good luck to the competitors, and best wishes to all the runners entering. For everyone else, on Sunday I’ll be on Twitter/JapanesePhotos.

5 Out of kilter things about Japan this week

Short and long term residents quickly realise that Japan is a place of contradictions, but also forget that their own countries have contradictions as well. Here in Japan some of these contradictions made it to national and international headlines.

The All Nippon Airways airline released a new TV advertisement on Saturday 18th January in Japan (ABC, Japan Today, see on YouTube). The actors in the ad speak English (though with a clear Japanese accent) and it is subtitled in Japanese. I’m not sure who the ad is aimed at, especially as it was released in Japan, though it’s in English, and most Japanese people haven’t the foggiest when things are said to them in English. The end of the ad shows an ANA pilot wearing a blond wig and a long strap-on nose. I think most non-Japanese people in the world are not actually blonde, and I’ve not met a single person in my life with such an exaggerated nose. Such stereotypical exaggerations may remind some of the World War Two era, American anti-Japanese posters. On Monday ANA has apologised, initially said they would not withdraw the ad, but then Tuesday said they would alter it. 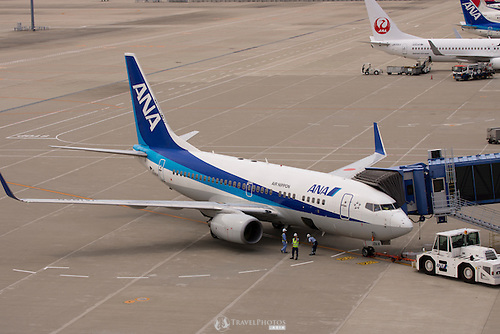 For this photo, and others like it, see my Transport gallery in my PhotoShelter portfolio.

Yasakuni Shrine is controversial. Not because it honours Japan’s soldier who have fought and died for Japan, but because some of the names enshrined includes convicted class A war criminals. So on Boxing Day (26th Dec, 2013), the increasingly right leaning Prime Minister Shinzo Abe visits Yasakuni Shrine to pay his respects (BBC, CNN, Huffington Post), a move that angers China and Korea and others, and should also anger some allied nations like Australia and the UK who have lost soldiers to Japanese war crimes.

The number of workers available to work in factories is declining. However, since the crisis of 2008, many of Japan’s companies moved their manufacturing overseas to Thailand and China, and have no plans to return production here. Despite the extremely low participation of women in the workforce, especially with forced retirement after giving birth (The Asahi Shimbun), the government decided to bring in foreign workers (Japan Today). Also, Japan welcomed its 10 millionth visitor(s) 2013, a Thai couple (who do not have blonde hair or long noses), and expects this number to rise ahead of the 2020 games in Tokyo (Japan Times).

Earlier this week, Anwar Ibrahim was refused entry into Japan. As I understand, he was an important figure in Malay politics and was a real rival to some other politicians. It also appears that in 1999 some charges were laid against him in an effort to character assassinate him and ruin his political career. Japanese customs just simply refused him entry, and without adequate explanation (ABC, Japan Today).

China recently unveiled a portrait of a Korean who assassinated Japan’s first prime minister and the Japanese governor of the occupied Korean peninsula (Japan Times). I agree, it is distasteful for a government to sponsor such a thing, but still, the Japanese prime minister honouring war criminals is perhaps worse, and may lead to a further drop in Chinese and Korean tourists to Japan (China Daily Asia, The Asahi Shimbun). Further still is the recent Twitter outrage at Wakayama Prefecture’s dolphin hunt, where the current US ambassador Caroline Kennedy and Yoko Ono have condemed the hunt (Japan Times). Yoko Ono also cites international criticism as a valid reason to cease the hunt. Also, to lend their wait to the protest, Anonymous hacked Wakauama Peefectures website and shut it down. 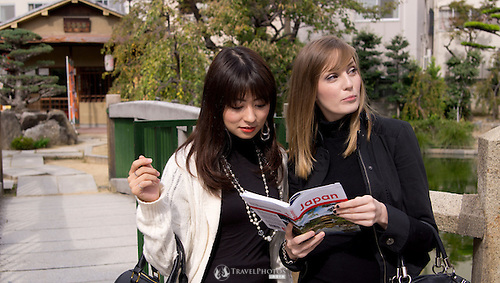 For this photo, and others like it, see my PhotoShelter portfolio.

It does look like Japan wants to engage internationally, but it doesn’t do so sincerely or worse. I think it’s best to remind the reader that all countries have their contradictions, and it’s always easier to see these when you’re on the outside looking in.

There was an explosion at Mitsubishi Materials chemical plant in Yokkaichi (ABC, BBC, Japan Times). It has been reported that there are 5 dead. This part of Japan has suffered numerous industrial problems including Yokkaichi Asthma, and drinking water issues. It has been known to be the most polluted city in Japan.

I believe I have taken a photo of the affected plant. According to Google Maps, the Mitsubishi Materials plant and this photo (Sony a77 GPS data) are of the same place.

The photo below was taken from the Yokkaichi Port Building, and looks over the Mitsubishi Materials affected plant. For this photo, and others like it, see my agent’s website, “Yokkaichi”.

A view of the Yokkaichi industrial area

Death of a young war photographer

A few weeks ago, Molhem Barakat, died in the Syrian civil war. Not as a fighter, but as a war photographer for Reuters News Agency. It has since been revealed that he earned only $100 per batch of 10 photos he uploaded daily (PetaPixel). He should have been paid more than that, and on a per photo basis. The other point of concern is that Reuters never provided him with training, and it would seem that they have no or little intention to provide support to his family, and have little remorse for his loss. There is also some disagreement about his age at the time of hiring and his death. If you’re interested in showing your support for Molhem, and to prevent Reuters from exploiting other such people, Change.Org has a petition you can sign.

This Photo of the Week (POTW) is from the previous biennial 17th Nagoya Motor Show. Here, a model introduces a Suzuki concept car. The Nagoya Motor Shows starts this Thursday (12th Dec) and finishes Sunday (15th Dec). This show ought to be considered significant, especially as Nagoya is the home and heartland of the Toyota Motor Company and its parent company, sister companies, and subsidiary companies. This central region makes a large portion of Mitsubishi cars, and the components that are sold for the assembly of Honda, BMW, Mercedes, Ford, GM, and many other international brands. However, the Nagoya Motor Show little reported internationally and I’ve seen no effective coverage of it on the internet media, and is overshadowed by the Tokyo Motor Show… yet.

A model introduces a Suzuki concept car at the 17th Nagoya Motor Show in 2011.

Earlier, the BBC News website reported that there was a fireworks explosion, injuring and seriously injuring about 50 people including children in Kyoto, and of which caused the cancellation of a fireworks display (BBC News). It was later revealed that it was a food stall or similar (like shown below) was using a generator and possibly was refilling the generator fuel tank when some fuel splashed onto the generator itself, causing a fire and explosion of the fuel tank. Then later a second fuel tank exploded, of which was recorded and released on the internet. Stalls like these below are typical scenes seen all over Japan for all festival and cultural events. See the Japan Today article for more information. These images, and others like them are available at my portfolio and my agent’s website.

Both images are typical stalls found at all Japanese festivals. The lights are typically powered by fuel generators.