This Photo of the Week is of the Naked Man Festival to be held this Wednesday. The festival began over a thousand years ago in Nara, and is held in Kounomiya, about a 20 minute train journey from the centre of Nagoya on the Meitetsu Line. It typically involves over 13,000 men (and boys), and unsurprisingly, over 180,000 spectators (more if it’s on on a weekend). The public spectacle begins at about 1pm (though you need to be there by about 11am for a good standing space), and it’s cold, and it has snowed in previous years. More information can be found in previous blog posts, and at Japan Visitor. 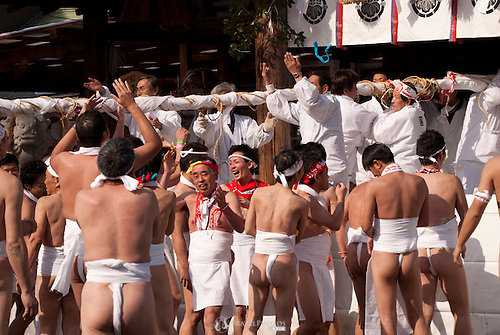 On Saturday the 16th February will be the Naked Man Festival to be held at Kounomiya, near Nagoya on the Meitetsu train line. It’s a major cultural event that attracts often a very willing and volunteer group of about 13,000 men (of various sizes and ages), and about 130,000 on-lookers (women of all ages, and a lot of guys, too). I’m sure because the event coincides with a weekend day this year, the crowds will swell… no pun intended. I will be icy cold after all. I’ve blogged about this event recently, providing a lot of info to help photo editors, so see here for that well-detailed info on the Naked Man Festival.

See the Naked Man Festival gallery on my PhotoShelter porfolio for more photos like this, or my agent’s website.

I think this is the first post of 2013. As you know, Photo of the Week (POTW) blog posts aren’t exactly weekly, as I am a busy person. I do apologise for not being able to be so frequent, but blogging is just the fun side of what I do, and it takes time to think of something worthwhile to say, and ensuring it is worth your time to read. POTWs are usually published each Monday at about 6pm (Tokyo time), though it may have to be adjusted later this year as my schedule may change. Please use the RSS button in your browser to obtain a list of updates, and bookmark this site in your browser, too.

You may have noticed the new version of the JapanesePhotos.Asia webpage looks a little different. The main two differences are the drop-down menu, and the multi-screen functionality. That means, the homepage should work well on smartphones, tablet computers, desktop computers (Mac, Windows, & Linux). However, there is unfortunately a caveat. The homepage is designed for the most up-to-date web 2.0, HTML5 systems. Which means the Microsoft Internet Explorer (IE) browser (regardless of age) may have functionality problems. Many websites, companies, and web designers have been complaining for years about the out-of-datedness of IE, and very recently Google explicitly stated it cannot provide any more support for IE. However, I do maintain a simple text menu at the bottom of the page, above the footer for IE fans. On that point, currently, WordPress (the volunteer group that created and maintains this blogging software) still produces IE compatible software, though I don’t know how much longer their resolve will last.

This Photo of the Week (POTW) is for an upcoming annual event, the Naked Man Festival (Hadaka Matsuri). It is held in coldest, most miserable part of winter in Kounomiya, just outside of Nagoya, in central Japan. The next event will apparently be held on the 16th February 2013 (according to WhatonWhen.Com). Here is some info from my 2009 blog post:

It began over 1,200 years ago, in the year 767, when Nara was the capital of Japan. At that time, there were plagues affecting the Japanese people, so Emperor Shotoku ordered special prayers to be said nation wide. The governor of Owari Province (now Aichi Prefecture) asked the shrine at Kounomiya to do something about this, and to remove the bad luck. So, the Naked Man Festival, held in the coldest time in winter was formulated.

If you’re planning on being one of the 120,000 plus members of the crowd, I suggest that you prepare well. That meaning warm clothes and avoiding both dehydration & over-hydration. Because of the cold, possible snow and ice on the ground, you’ll need to wear two pairs of socks, thermal leggings, warm trousers, thermal shirts, warm shirt, jumper (sweater), warm jacket, gloves, and scarf. Drink plenty the day before, so your body is at peak hydration that morning. Take a good hydrating drink (eg: Pocari Sweat or Aquarius). Don’t drink too much in the morning. There are toilets there, though I don’t recall ever seeing them, and the toilets at the station will require a ticket for entry.

The event usually starts at about 1pm. Be there before 12pm to get to know the lie of the land, where everything is, have some snacks to warm you up and ensure you have enough energy to withstand the next few hours. Importantly, find a good standing spot, and try to make guesses as to what parts of the public access will be closed off from 1pm, and so you can get a good standing space. Usually, the inside of the temple area will be overcrowded, and you’ll need to sit on someone’s shoulders, and you may be told to get out of the way once the event begins. Don’t worry, as you can work out how to plan things better next year. Also, there’s plenty of space along the boulevard leading up to the temple (shown below), though crowded with the other 100,000 people. Welcome to ‘contemporary zen’ [/sarcasm].

It is a great cultural event, simply because it is such a rare kind of event for North Americans, Europeans, and other Western people. More photos like this POTW can be found on my agent’s website, Asia Photo Connection, by Henry Westheim, and my own portfolio on PhotoShelter.

In the rush to catch up with post processing the Naked Man festival photos, I didn’t have the chance to remember to do this POTW… well, I just plain forgot. Here is one more hurrah from the weekend, a township team showing respect to the shrine after delivering their bamboo pole and other offerings.

The Naked Man Festival video was just uploaded to YouTube. Warning, the sound track might be a little loud…

The first photos from Nagoya’s Naked Man Festival. More will be available at my agent’s website and my own portfolio. This event was held as snow from the previous two days was still fresh and melting, so of course the participants need to be rolling drunk to do this, which means some fall over and scrap themselves on the ground. Also, a late afternoon cold wind whipped up so the ambulance crews arrived, perhaps to treat those suffering hypothermia.The Naked Man Festival (hadaka matsuri) is an annual event that began in the year 767ad, in the Nara Period. The event is held to removed bad luck and bestow good luck on the people. In the past, this event has attracted 180,000 spectators and 12,000 (naked) male participants. 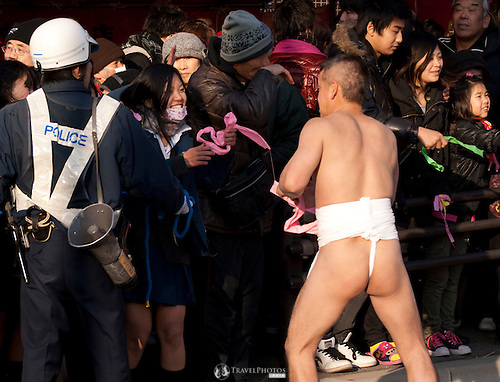 The event features a number of motifs, including teams based on township, giving gifts to the Kounomiya shrine, being drunk on sake, climbing bamboo poles, giving strips of cloth to spectators (mainly to women), and more. The gifts that are given to the shrine include a tuna, a barrel of sake, banners and long bamboo poles. For the first time visitor the bamboo poles seem to be the most important part. The teams carry all of these things, and stop along the way to throw their bamboo pole up, erecting it, and someone will climb it. It seems that each town’s bamboo poles are different. I guess that the more support from the town equates to a bigger and better bamboo pole. These poles are wrapped in cloth and lashed with rice-hemp rope. The event is held according the the lunar calendar at about the second weekend after the Lunar New Year (or 15th January, lunar calendar). More information can be found at Nagoya Info and the English Wikipedia site.

The Naked Man Festival (hadaka matsuri) is an annual event that began in the year 767ad, in the Nara Period. The event is held to removed bad luck and bestow good luck on the people. In the past, this event has attracted 180,000 spectators and 12,000 (naked) male participants.

The Naked Man Festival (hadaka matsuri) is an annual event that began in the year 767ad, in the Nara Period. The event is held to removed bad luck and bestow good luck on the people. In the past, this event has attracted 180,000 spectators and 12,000 (naked) male participants.

More information from a blog post for the 2009 event:

It began over 1,200 years ago, in the year 767, when Nara was the capital of Japan. At that time, there were plagues affecting the Japanese people, so Emperor Shotoku ordered special prayers to be said nation wide. The governor of Owari Province (now Aichi Prefecture) asked the shrine at Kounomiya to do something about this, and to remove the bad luck. So, the Naked Man Festival, held in the coldest time in winter was formulated.

This POTW is of the Kounomiya Naked Man Festival, an annual event held just after the Lunar New Year, a calendar that Japan used to follow until the post war years. It’s not often I post an image from my agents website, but it’s there, and more information on the history is on this blog.

NAGOYA - JAPAN, 7 february 2009: the naked man festival (hadaka matsuri) was held. this annual event began in the year 767ad, in the nara period. the event is held to removed bad luck and bestow good luck on the people. the event this year attracted 180,000 spectators and 12,000 (naked) male participants.