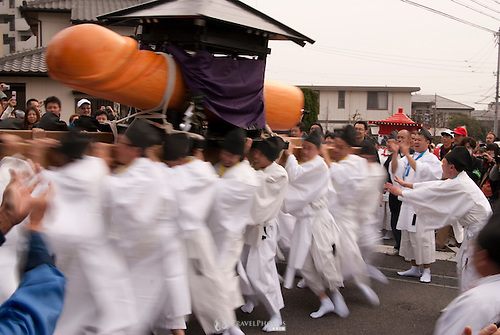 The Tagata Fertility Festival, Tagata Penis Festival, or Tagata Honen Matsuri is the festival that is becoming famous for the large wooden penis that is paraded around a town. It isn’t a celebration of immaturity or pervertedness at all, as many Westerners might assume. It is actually a ceremony to ask for a rich crop harvest, and the phallus is made of fresh cypress pine each year, to symbolise newness, freshness, and fertility.

A penis? From my time in South Korea, Taiwan, and Japan, I have come to realise some fundamental differences between an Anglo-Western culture (prominent in Britain, North America and Australia) and the Far Eastern countries: we have Catholicism and they have Confucianism and Taoism. This might not be ground breaking news, but it is particularly relevant in understanding why a Japanese Shrine can have a fertility festival in which families and children will attend to the order of 100, 000 attendees annually, but you will not see a phallus nor 100,000 people at a Catholic church. The main fundamental difference is that in Catholicism anything related to sex is considered a sin, and we Westerners must feel guilty about it. However, the Far Eastern countries don’t have this burden of shame, and so they are happy to celebrate and pray for a good harvest, fertility, and use a phallic symbol as well. 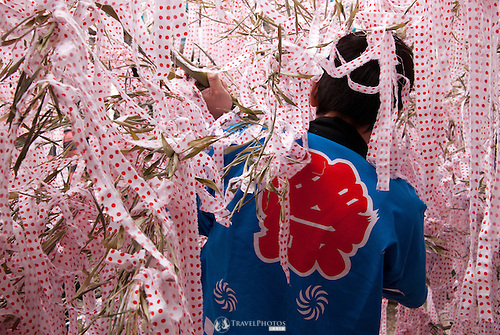 So who attended? To my estimation, it seems that the number of people to crowd at Tagata Shrine was far less than 100,000 people (I have seen crowds of 100,000 people and more at other religious festivals in Japan). But this shortfall shouldn’t be surprising; this festival was on the first Tuesday after the 11 March, magnitude 9.0 Tohoku-Kanto Earthquake. 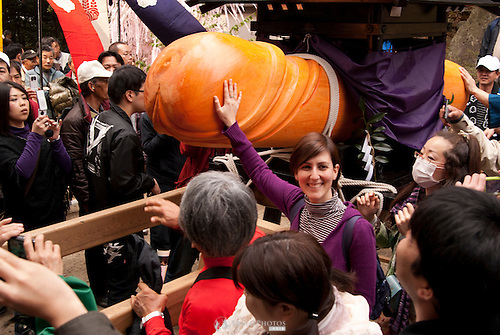 In the winter months the wooden phallus is carved by master craftsmen using traditional techniques, and wearing purified clothing. On the day, it is strapped to a saloon and put on display. Here is a great photo opportunity, and there’s never a shortage of happy old men to encourage any lady (of any age) to pose by the big penis. In the early afternoon the phallus is then paraded very slowly through the town. Also paraded are smaller penises, and bamboo trees with white and red-polka dot ribbons. I still need to find out what the ribbons mean, but I guess it’s more about human fertility than crop fertility.

From Nagoya Station, take the Meitetsu train company Inuyama line to Inuyama Station for about 25 minutes. Change to a local train on the Komaki Line to Tagata-Jinja Mae Station (lit. Tagata Shrine in-front of Station), for about 11 minutes. The total oneway trip is ¥730, but check Hyperdia.Com for schedules and current ticket prices. From Tagata-Jinja Mae Station just follow the crowd to the event. Some people go to the destination temple, or to the temple where it all begins, or do both.

My images are available on my PhotoShelter Account, and will soon be at Asia Photo Connection. Also, see Wikipedia for more information.

Coming up this Spring

Coming up this Spring are a few important things. Firstly, a 10% discount for all purchases at my PhotoShelter portfolio with a minimum USD$25 purchase, unlimited use, until 30th March, 2011. Coupon code is: SUPERSPRING.

Thirdly, the Tado Horse Festival, is a Shinto religious festival intended to bring a good harvest for this coming growing season. If a horse can make it up the steep slope and over a mound-obstacle, then a good harvest is expected. Only after the event do the local farms begin sowing. The 10% Spring discount also applies to this PhotoShelter gallery.

That’s pretty much the main events that are coming up this Spring.

Japanese people are pretty much built from the ground up on rice. They might eat it three times a day. They drink it in the form of the alcohol sake at parties, and end of year parties; for ceremonies like weddings, funerals, and engagements.

The very origin of Shinto, and all of its symbols are related to humble rice. The very architecture of  Shinto shrines, throughout Japan, is based upon early rice storage buildings in the pre-Shinto era a little more than two-thousand years ago. It is said that rice and sake play a central role in secret Shinto ceremonies that involve popular festivals, and even the emperor and his family. It’s perhaps not inaccurate to say that Japan, and the Japanese people, were built on rice.

I organised a friend (Paul), a car (Porte), and a sunny day (Tuesday). Unfortunately it took an hour longer to get to Hase town from my place, and so we missed the best of the early morning light. They say, “only mad dogs and Englishmen go out into the midday sun”, which is good because I’m an Englishmen, so I have licence. What remains in the photo collection at Asia Photo Connection are the pick of photos that can work with the midday sun.

Last night I had the great honour of being able to go to both a Buddhist temple and a Shinto Shrine to see in the new year. Japanese people do not have a problem with going to both a temple and shrine to pray for happiness and health in the coming year. As I went to meet my friend, the weather really reminded me of England: the cold, the light snow, the wind, and the darkness.

First, we made a stop at Kougaku-ji Temple. It’s a small temple, just a two minute walk from where I live. I’d seen it before, and the Tokugawa Emblems that adorn it. Previously, I thought it was just a small insignificant place. However, it is the place where the remains (or some of) of the very first Tokugawa Shogunate are kept. Following the Battle of Sekigahara in 1600, Ieyasu Tokugawa ended the Japanese Warring States Period and established a military dictatorship which ran from 1600 to 1868 (Wikipedia). In modern Japanese pop culture, this is a very important time. Many television dramas, comics, and books are written about the establishment and end of the Tokugawa Era. Considering the immense impact that the Tokugawa Clan has had on Japan, it is amazing to think that I live just around the corner from a small, unknown temple where Ieyasu Tokugawa’s (some of the) remains are now kept. This is a real local ‘best-kept secret’.

It was here, at this very small and intimate temple where I saw in the New Year. The Buddhist monks (pictured) chanted sutras from books from about ten minutes to midnight, and ended just after midnight. Afterwards, we were taken outside (in the freezing cold, where snow was still settled on the ground) where we would, in turn, strike the temple bell. The bell was struck 108 times, as it is said that we have 108 sins that need to be cleansed. Fortunately for me, I only had to strike it once, the crowd and the monks would do the rest.

Unfortunately for me, I didn’t know what to expect, so the camera that I took was only just enough to capture the events for this blog. I hope to go back to this temple with a tripod and other gear and take my time to photograph it properly, and do it justice.

A Shinto priest in front of a shrine on New Years eve.

After having the New Year chanted and tolled in, we went to Heaven Shrine, known locally as Hachiman Jinja. Here we had offered to us invitingly hot noodles to eat, and refreshing sake to drink. After refuelling and getting warmed up again by the huge fire (where last year’s prayer / wish boards are burnt) we went up and got new prayer / wish boards. On these, you would write your wishes for the New Year. Unfortunately, the lighting here was absolutely terrible, and so this is the best image I could manage under the conditions. Afterwards I went out for one more small cup of sake (I swear, it was only a small amount that I had), was introduced to some of my friend’s friends. Warmed by the fire a little more, then went home at about 1.30am.

It began over 1,200 years ago, in the year 767, when Nara was the capital of Japan. At that time, there were plagues affecting the Japanese people, so Emperor Shotoku ordered special prayers to be said nation wide. The governor of Owari Province (now Aichi Prefecture) asked the shrine at Kounomiya to do something about this, and to remove the bad luck. So, the Naked Man Festival, held in the coldest time in winter was formulated (first published by me at Winjeel.Com, Feb 2009).