This is an interesting Photo of the Week. Japanese people pride themselves on their food. It’s almost as if anything about food is a profession, hobby, interest, lifestyle, but least and last of all, a means to live. There’s even a large magazine industry just on local eateries. There are many, many tv programs playing all day long about food, home cooking, restaraunts, and eaties in various locales around Japan. They’ve even gone so far as lodging an application with UNESCO to have certain Japanese foods list as intangible cultural assets (News on Japan). In short, food is a national obsession, one that is so ad nausem that I do everything possible to avoid it. As a consequence, I don’t have much choice of photos for this story, but they’re good.

What’s the story? In the Oxfam Food Index, Japan is ranked only, only 21st. Despite the near-extreme obsession with food the Japanese have, laid back Europe out ranks Japan.

A food stall at the annual Ishidori Festival, the loudest festival in Japan.

This is the first Photo of the Week for 2014, so it’s only fitting to look at what’s up in Japan now… snow! Shirakawa town is a UNESCO World Heritage Site, and is in the Gifu mountains, and is pretty guarranteed to get lots of snow. The town is in fact a collection of rural houses moved to this location to help centralise and maintain a traditional architectural style, and also to maintain the culture required to re-thatch the roofs every 20 years. This photo was taken on film, and the others in the Shirakawa Gallery of my PhotoShelter portfolio were taken on a mix of film and digital. 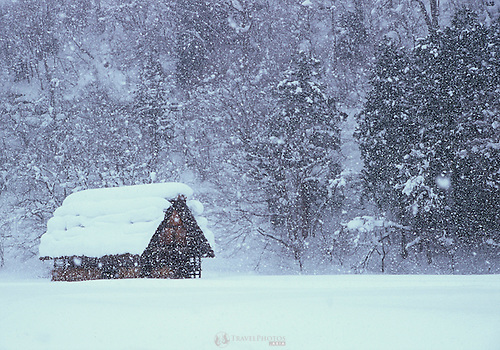 It was reported recently that Mt Fuji has gained World Heritage status (BBC, Japan Today). Mt Fuji had been rejected before because of all the rubbish and poor maintenance of various facilities. To combat the previous issues, it seems that the local government will charge 7000 yen per climber, up from 0 yen. That’s gotta be a crowd pleaser. So for this Photo of the Week (POTW), here’s Mt Fuji as seen from the air, in winter, with it’s iconic snow top.

This Photo of the Week (POTW) is from the UNESCO World Heritage Site of Shirakawa town. The name “Shira” + “kawa” in literal translation is ‘white’ + ‘river’. See more of the white around this riverside town at my PhotoShelter portfolio, and more info about Shirakawa here.

Photo of the Week

This POTW is from Shirakawa Village in the Japan Alps, and as you can see, it’s very snowy, dark, and cold. What you can’t see is that it is also a UNESCO World Heritage Site. 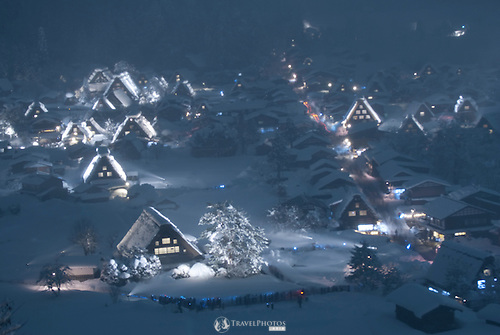 This Photo of the Week (POTW) comes from the UNESCO World Heritage Site of Shirakawa. This village is well known for being the place where traditional mountain rural farm houses were moved to and maintained. The thatch roofs are massive, and requires a team of a lot more than 50 people to help build. These thatch roofs need replacing about every twenty years and it is a real community project. My guess is that they plan whose house is to be done next, and they would probably have all the houses on a roster. Shirakawa is a living open are museum. People live in the houses, these houses are real shops and museums, and private homes. The village is great to stroll around in the day, and very nicely lit up at night (as seen below). I do have photos of the whole village at my PhotoShelter portfolio, please browse for more.

Wow, I never knew how addictive Google+ could be. I joined in the time when it was invite only (thanks to Adobe Express on Twitter for the invite), and since G+ went public… wow! Consequently I missed last weeks POTW.

This photo was taken in Shirakawa, a mountain village listed as UNESCO World Heritage Site. It features old style large farm houses with thatched roofs. The village opens only a few times during winter where they set up flood lights to allow people to see the houses at night, making the whole place look like a Christmas card. More Shirakawa photos can be seen at my PhotoShelter portfolio.